What has happened to you, oh beautiful Syria? - MAHMUD EROL KILIÇ 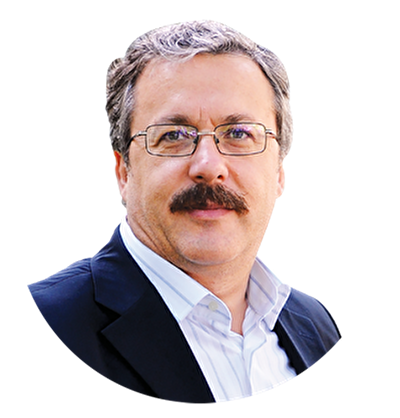 06 December 2016
Once upon a time there was a folk song written by Çolpan that said, “Oh beautiful Turkestan, what has happened to you – Your roses have died, without reason and untimely.” As we wait for the roses in that land to bloom, it is ironic how in recent years, every time I watch news on the land of Damascus, I mumble, “Oh beautiful Syria, what has happened to you?”

Based on Prophet Muhammad saying, “Damascus is the land Allah [God] created eminent on earth. The angels extend their wings over the city. Allah allocates his most distinguished servants here,” (Abu Dawud, 2483) our sage Muhyiddin al Arabi moved there in his later years and died there too. His grave is on the skirts of Mount Qasioun.

My dear friends, I am in misery. As they say, “May Allah never let anyone experience what I did.” I have been traveling between Istanbul and Tehran for my job for eight years now. I spend half the month here and almost half there. I watch the news on the Syrian regime bombing schools and killing children and then listen to the commentators comment on how the Sunni children are atrociously killed, in my home in Istanbul. As a Sunni Turk, I say, “Damn this ferocity.”

Then I go to Tehran and watch the evening news there. I watch – uncensored – news on how “Sunnis” like al-Qaida or Daesh torture to death the Shiites they catch. These are images of hearts being pulled out of people who are alive and breathing and others being burned to death. The begging and cries of the victims give me goose bumps. I try to emphasize with the Shiite Iranians who watch this. I go crazy and yell out the same curses here too. Can any heart endure this or can anyone not be devastated? I can give hundreds of examples from my television experiences in two different settings.

But friends, hang on a minute, there is something weird.

We are being deceived!

Neither news is aired by the media in the other country. We are shown only what is done to the detriment of their sect, while each party censors what they do themselves. The people are deceived, getting only one side of the story. And then we have the ignorant religious leaders in towns who explain exaggerated stories about the “others” (who are actually members of the same religion), and twist God's verses and make their followers “Show compassion against the disbelievers and become violent against each other.” It is understood that those who twist the meaning of the Quranic verses do not realize that they actually assume the role of the group that Prophet Muhammad points out as, “The Syria issue is going to lead you to divide into collective groups: A group in Damascus, a group in Yemen, a group in Iraq!”

What's more is, you see how the journalists are brown-nosing the ruling government, further fanning the flame with the rambling articles they write while sipping a coffee, with no clue about the field nor the languages spoken in the region. To say it in tasawwuf terms, looking at the constant change of decisions, you can tell that the administrators of both sides are influenced by these brown-nosers, who are far from knowledge and depth.

While all this happens here, I feel as if I can see others sit back in their countries puffing away on their cigars, watching the news of both countries.

I think, those who masquerade as intelligence after watching James Bond movies, are damaging the benefits of the country. Acting youthful might be beneficial in operational terms, but the real weapon is in knowledge and the one who has knowledge. Mark Sykes, the chief architect who shaped the Middle East at the start of the century with the Sykes-Picot project, did not do this by making a movie. He did not do it as he sat in London either. He wandered around in Ottoman cities. He spoke the languages of the people. He did not work with a translator who would work for the other the next day. He read a lot. He published his memories. He was the man to offer dividing the region into different cultural groups, instead of having the ally countries annex the Ottoman Empire. Politicians in London like Kitchner, who were masters at knowing people, saw the talent in this man who was only 39 years old but ready to die. Thus they actually took action based on the first-hand information he gave to them from the ground, as well as information he knew was certain.

Therefore, I would say the only way our people and our land can live in peace and security is through making coldblooded analyses and staying away from adventure. With the exception of those who attain true meaning, being religious and nationalistic, two emotional fields, can sometimes blind people. To say it in slang, the most provocative situations arise from these fields. Yet this can bring harm to dignified interests. Power without knowledge is not strength. Dinner is served by the master chef, but there are thousands working in the kitchen of big states. In smaller states however, individual shows are staged, trying to see if they strike it lucky. If it works it does; if it doesn't, then bad luck. It goes as far as it can. But it shouldn't be forgotten that this arbitrary and emotional condition will cause serious deficits in the problem of survival of states, which are rational instruments.

As we all know, last week during the OPEC meetings, production countries made decisions in regards to supply and price adjustments. But did you know that Saudi Arabia and Iran had a closed meeting and agreed on Iran increasing its supply and prices? Iran was once the second country in OPEC, but lost its position because of the embargoes on it. Now, once again it will try to gain its position and increase its supply via Saudi Arabia. For years, Saudi Arabia had supported those who said let's knock Iran down by dropping prices. But now when the same weapon started to hit Saudi, both countries decided to act together and increase prices. How lovely. The two opposite poles of Islam have come together? Obviously, it could be achieved, if they wanted to.

But, now I would like to ask, is the blood in Yemen and Syria more valuable than the petro-dollar? Why didn't they come together to stop the bloodshed of thousands of Muslims? Why didn't the religious leaders of both sides say, “Shiites do not use Wahhabi petrol” or the total opposite? But they did not hesitate to give uncompassionate fatwas on shedding Shiite blood or Sunni blood. How is the vain man to know that the human, which God created as superior to all other creations, carries the secrets of the skies in his blood, while petrol carries the pus deep down in the ground? We are all responsible. Whether Sunni or Shiite, we are all responsible!

Once the Prophet of mercy had said, “If you knew what I knew, you would laugh less and cry more.” You can now use this statement in your own doings too. Like: “Oh you ordinary people, if only you knew what others knew.” So, what I am trying to say is: I would have loved to be a man who looked out of one window. How comfortable can it be? They say scream and you scream, they say clap and you applaud.

I know I am saying dangerous things. The answer Prophet Yunus (also known as Jonah) gave when he was told, “Be quiet Yunus, Mollah Qasim will hear,” is my slogan: “What about me, shall I die when I can't say it?”

Let no one be harmed from my words. But a friend has to be cruel to be kind. But, the hypocrites should know that, “It is forbidden [haram] for the Damascus hypocrites to win over the Damascus believers.” (Tabarani)

I want to end my lines by drawing the attention of all considerate, conscientious and wise friends to the following words of the prophet of prophets: “When Damascus is destroyed, it means there is no more use left in my ummah.”